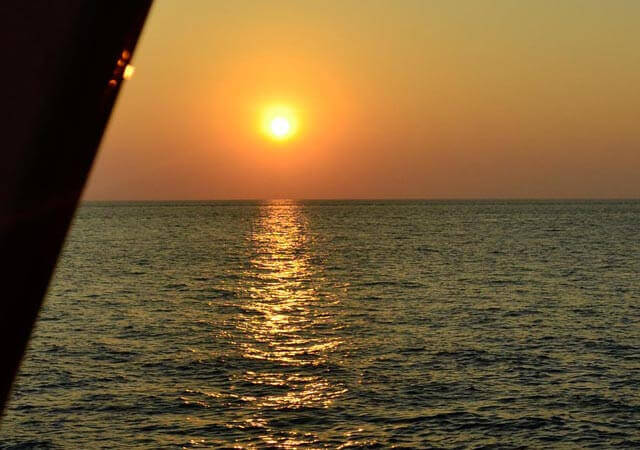 This story all begins with some very nasty weather, nasty enough to almost have our entire guest list and some of the crew hugging the porcelain and wishing they’d stayed on dry land. But we as divers were not about to let some ocean motion get the better of us. So we parked the Scuba Explorer in Bay 1 at Racha Yai, usually only 1 hr from Phuket, but it had taken almost 4 to get there this time fighting the ocean the whole way.

Thankfully Bay 1 was calm, conditions had funnily enough been great all day, with 15 + meters of visibility and no current at all, we’d managed a few really good dives, you certainly would not have guessed it was so nice under the waves if you had been looking at them from above. So we decided to do something a little different for the guests and organised a rare sunset dive. You jump in at around 6.30pm the sun sets around 7pm and your dive turns into a night dive, very fun and you get to see the reef night shift take over right before your eyes. 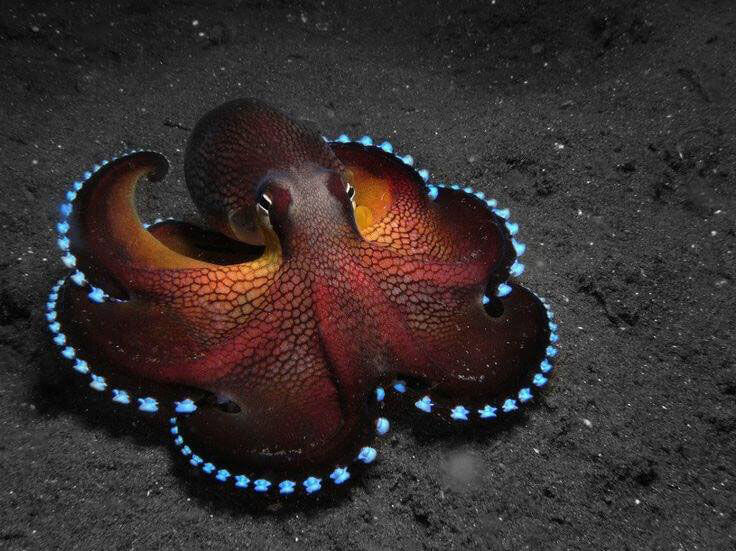 Hanging out with the night critters

To make this dive even more interesting for me, our tour leader had decided to throw his nice shiny torch off of the boat in a fit of bitter disappointment at losing the Texas Holdem tournament the night before, thankfully though he had also turned it off so that there was zero hope of ever finding it again. To this day no one knows how he truly lost it, but pretty sure he just wanted to test our searching abilities in case we ever lost anything important, you know, like another torch.

My group consisted of another two very experienced instructors doing some night filming and macro spotting, so it was going to be a good dive with us three just chilling out and finding critters to annoy with bright lights.

Speaking of lights the first thing I found once I hit the bottom was our wayward torch, I have knack for retrieving lost equipment, even boat anchors. So bonus torch for the dive and time to figure out how best to explain to the tour leader that the law of the ocean clearly states you get to keep what you find, he wasn’t going to be happy.

So off we went to find some Pygmy Scorpion fish, yes that’s right, bay 1 that night produced two Pygmy Scorpion fish right next to one another, beautiful pinks and dark reds, but shy to the combined 4,000 lumens of light being shone on them for video, we didn’t get much good footage sadly, but was awesome seeing them, it was the first time I’d ever seen them and the other instructors said later it was the second time in 8 years they’d seen them in Phuket waters!

We moved on and while the other two were filming/trying to set fire to, something else, I found a Northern Star Eyed Octopus, little guy about the size of my hand, very rare find. He was a great screen actor but a terrible Octopus, little guy spent a bunch of time attempting to hide from the camera and my light but inadvertently put on an awesome show for us, weaving in and out of rocks, changing shape, texture and color. I never get bored of watching them and managed to get the attention of my dive buddies by wildly flicking my new secondary torch at them. 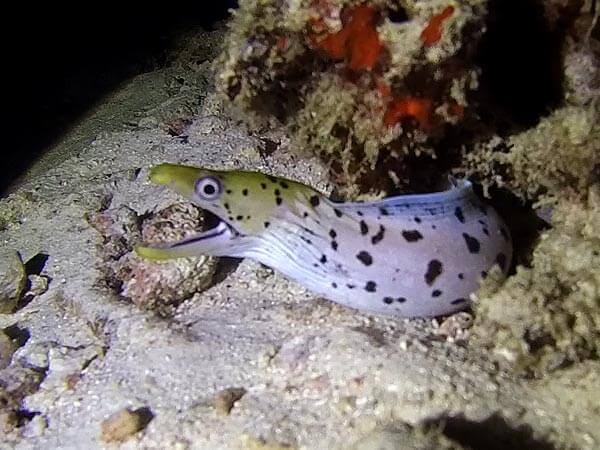 This is about the time I felt a tugging on my foot. While filming and being distracted I had managed to get myself nice and close and tangled to some fishing line, at first I didn’t take much notice of it, there is tonnes of it floating about down there sadly and not the first time I’ve been wrapped in the stuff. So after a good minute it started to really annoy me so I figured I’d quit filming and just pull it off me, bad idea number 1. So I tugged on the line and unwrapped it from my bcd and let go of it. Then literally in the split second after letting go of the line, I see the sinker and lure get reeled up with a furious jerk as if it was still attached to a fishing pole, it was a truly ‘What the Hell’ moment.

I looked up to see the tell tale lights of a boat above us, with the line racing toward it. I was pretty lucky not to be hauled up to the surface from 20 meters down at break neck speed by these idiots who were fishing off the back of another liveaboard. That would not have ended well, but hey, managed to avoid it I thought and went back to filming a cool little baby Fimbriated Moray. Then, and I’m not kidding, what do I see smack down in the sand not 10 cm’s from my head, yes, the sinker and lure plop right back down next to me where I was filming. I figured the fisherman or in this case ‘idiot at the other end of the line’ had not seen the bubbles we were obviously making or the 5,000 lumens of collective light we were using and thought he’d just missed the biggest radioactively glowing fish of his life, so here’s a new baited line to try a second time. That is around the moment I pulled out my dive knife and cut his line, nabbing a hopefully expensive lure, swivel and sinker, as an added stuff you, I pulled really hard on the line a few times to imitate a desirably big fish.

Even with all this going on I was pretty happy as this dive had turned out to be quite profitable, new torch, new fishing gear, it certainly had me thinking what else I could find down there. So I spent the rest of the dive looking for lost gear and ignoring the wildlife, it was pitch black by that point so I decided to play with the scatter/bio-luminescence for a while and get myself totally lost in the process (bad idea number 2). I saw some lights from a boat and decided to ascend close to it after noticing I only had 30 bar left (bad idea number 3). As luck would have it it wasn’t my boat, but in fact the boat they had been fishing off, sigh.

I spent a good 20 minutes trying to signal the boat boys from the Scuba Explorer with my torches, but they were to busy not looking at me to look at me, they must have known I’d been secretly cutting fishing lines and wanted to make me wait long enough to think about what I’d done. After a while the other boat got there lights out and spent some time helping me signal my boat, that was a nice change I thought from trying to reel my up from the bottom and put me on the dinner menu.

Eventually my crew decided I’d been in the water long enough to repent and sent the Dinghy over, I elected to hold onto the side and just slowly motor back to the dive platform (bad idea number 4). My weight was too much for the Dinghy and kept pulling it to one side and it couldn’t turn back to the boat correctly in the waves. This is about the time I gave up yelled ‘Stop’ and actually got in the dinghy (Good idea number 1), to the boat boys credit despite his best efforts at destroying my equipment dragging it into the dinghy, it all survived in tact and fully functioning, better luck next time I mused.

I arrived back to the boat and found the tour leader starring at me, asking silently why I’am always the last one back to the dive platform. So instead of getting into an argument about what we pay the boat boys for I elected to produce his torch and ask how much he was going to pay to get it back. He told me he loved me, I handed it over, crisis averted, though I suspect he has spent to long at sea and his love for other men is not literal.

This entry was posted in Stories from the dives and tagged diving on July 15, 2014 by Simon. 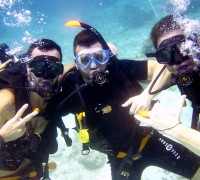 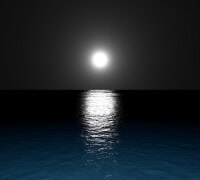 Night dives on the Scuba Explorer