Stories and articles about scuba diving in the Andaman ocean 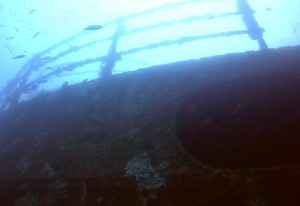 When someone says Wreck dive in Thailand or Phuket, most people immediately think of the King Cruiser, probably because it’s an awesome wreck and easily accessible, but what if I told you there is an even better wreck, just as accessible, shallower, more intact, safer and just generally purpose built for penetrating & scuba diving?

Enter the Klet Kaew Wreck or due to misspelling sometimes also known as the ‘kled Gaew, klad gaew, klad Kaew’ just off of Phi Phi Ley in the Southern Andaman, right next to viking cave if you are familiar with the area. A 50 meter long 382 tonne ex Norwegian gun ship, purchased by the Thailand Royal Navy, purposefully sunk on the 19th March 2014 for scuba diving in only 24 meters of water. So Unlike the King Cruiser, you get much more bottom time and the ability to penetrate into large sections of the Klet Kaew safely because it is so new and very much intact sitting on a sandy bed at only twenty four meters deep!

I myself recently dove it and spent almost my entire bottom time exploring the inside of this magnificent ship, I spent over 40 minutes on the dive, which is rare on wreck dives, because the Klet Kaew top is actually only at 14 meters, the bottom is 24, so once you start getting low on deco time, you go up to the wheel house and captains cabin and start penetrating there instead. I also spent a long time filming a giant ball of Striped Eel Catfish that were making a home deep inside the aft of the ship, they actually blocked my intended exit and I had to look for another one, thankfully there are plenty and the spaces are quite open, so swam through a large doorway…

This entry was posted in Dive sites and tagged andaman on July 14, 2014 by Simon.