Stories from the trips 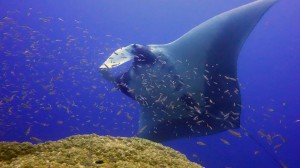 Seeing a Whale Shark or a Manta Ray on a dive is something very special, exciting, over powering, fantastic, whatever word comes to mind, it is simply amazing. Seeing them both on the same dive is something else altogether, words can not describe the feeling. Many of the customers on board the Scuba Explorers first Similans trip of the season got to experience this feeling on the first day at Koh Bon.

This dive was the third of the day, we had already done one dive at Anitas reef (or Coral reef, whichever you would like to call it) at Similan Island no 5/6, and the second dive at Koh Bon West Ridge. Both dives, whilst fun were nothing as spectacular as the third. At Anitas reef there is a big bomby full of big schools of shinning Glassfish, beautiful soft corals, Giant Gorgonian sea fans,even a one of a kind pink anemone on the top which had been bleached some years back by the raising water temperatures. the first dive on Koh Bon West ridge gave us 20m visibility, warm waters, a lot of life with schools of Emperor Snappers, Big Eyed Snapper, Chequered Snapper, Red Tooth Trigger fish, all coming in to feed in the morning. We also found a few oddly shaped Maldivian Sponge Snails.

Our next dive was the one not to have missed, we started to the North of the West Ridge this time and had been in the water no more then 5 minutes when I heard the frantic banging of the tour leaders tank, knowing there must be something big out there we all followed where he was pointed, out for the blue came a 4m Whale Shark, not big by Whale Shark standards but impressive by ours, the whole boat saw it and there were people excitedly high fiving in the water, having just ticked something of their ‘bucket list’. Koh Bon being famous for Manta Rays, it is rare to see a Whale hark there, I have not heard of anyone seeing one there before, unfortunately it did not stay with us too long, too many excited divers chasing it to get a better photo. 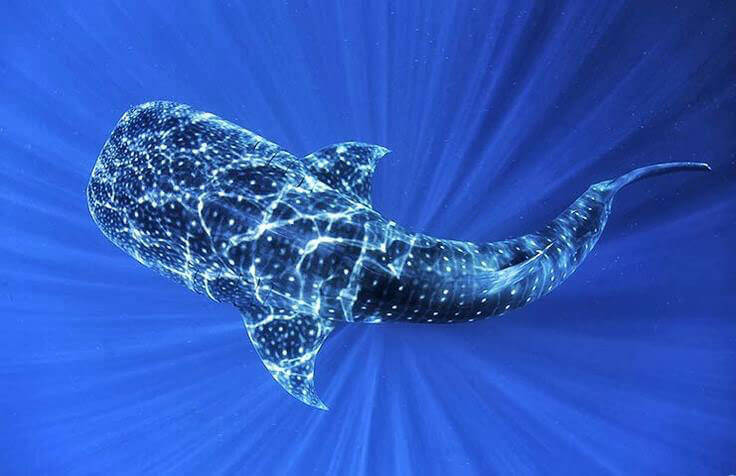 My group decided against going after more sightings of the Whale Shark and decided to continue onto the Ridge in search of the Majestic Manta Ray. 5 minutes later we were rewarded. We were swimming towards a cold thermocline, with it they bring nutrients the big stuff feed on so we were hoping of a sighting, out of it swimming gracefully towards us was a big 5m Manta Ray. For the next half hour we hung in the water as it swam around us, feeding and playing. Others divers saw us and came to join the spectacle. It turned out half the boat had gone off in pursuit of another Whale Shark Sighting and missed the Manta Ray whilst the other half had done what we did and continued to the ridge.

This Manta Ray was not bothered by the divers watching it, inquisitive animals they stay with you as long as you do not chase them.

Getting back on the Scuba Explorer we couldn’t wait to share our experience, photos and videos with each other. A Whale Shark and a Manta Ray in the same dive, a first for all of us, it does not often happen, it certainly was a special day indeed.

This entry was posted in Stories from the trips on November 19, 2014 by Nina Morris. 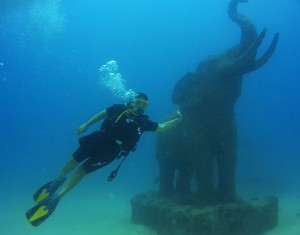 Freedom Divers asked me to come on-board the Liveaboard trip to the South Andaman for 2 days/3 nights to teach an Advanced Open Water course, of course I was delighted to accept, even the storm warnings were not enough to put me off.

I met my student to go over a few skills in the pool before we set sail that evening, after a few hours in the pool with her I was quietly confident that she would have no problems with the dives we had coming up. I also learnt that she was very excited and had never spent a night on a boat before, this was to be an experience for her.

We boarded the boat at 8pm ready to leave for Koh Phi Phi early morning for our first dive at 7am. The first dive I decided was to be a fun dive as my student had not dived in a year I thought it better to ease her into it and not throw her in the deep end with skills and knowledge, this turned out to be a good idea as there was limited visibility and fairly strong current on the first dive, it was still enjoyable and gave my student time to get used to diving again. Swimming through schools of Big Eyed Snapper my student gave my the thumbs up (wrong sign but I knew what she meant) to say she loved it, mental note here to recap some of the underwater hand signals. The following dives I got the correct signal of ‘awesome’ a lot.

This entry was posted in Stories from the trips and tagged diving on July 18, 2014 by Nina Morris.